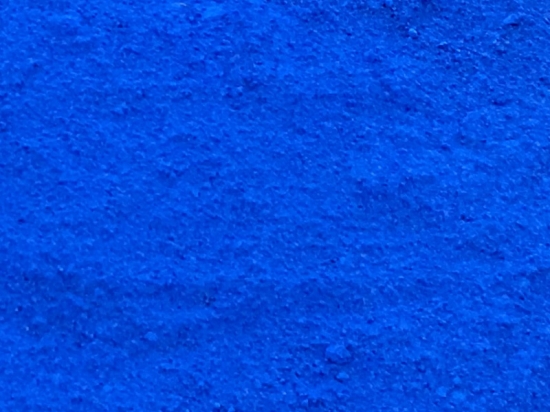 Why is the blue spirulina important?

Blue spirulina extract phycocyanin is a powerful antioxidant and can be used in many ways as a blue colorant. Both in cosmetics and in food.

Phycocyanin can be obtained from the blue-green algae or from the cyanobacterium Arthrospira (also conventionally known as Spirulina). It belongs to the phycobilins, which in turn are chromophores. In simple terms, it is a cobalt blue pigment that is used in the photosynthesis of cyanobacteria and other organisms.

Phycocyanin's color allows it to cover wavelength ranges of light that cannot be absorbed by chlorophyll. This gives organisms the advantage of being able to capture energy in dim light. These organisms take advantage of phycocyanin and phycobilins.

What is the effect of phycocyanin?

The effect of phycocyanin can basically be divided into two different segments. On the one hand there is the aesthetic effect and on the other hand the functional effect.

The aesthetic effect results from the very intense, rich color of phycocyanin. This can be described most closely as "cobalt blue" or "electric blue" and is somewhat reminiscent of Yves Klein's blue. Because of its strong saturation, it can be used excellently as a pigment in food and cosmetics, and can exert its effect as a coloring agent.

Apart from the aesthetic effect, however, the functional effects of phycocyanin are of particular interest. These are extremely diverse and include the following applications:

Phycocyanin can inhibit damage in liver cells (Ou et al., 2010). This is due to the action of phycocyanin as an antioxidant, which inhibits free radicals and the formation of cholesterol (Riss et al., 2007).

Phycocyanin has also been found to inhibit the release of histamine, which plays an important role in allergic inflammation (Remirez et al., 2002).

Phycocyanin shows strong neuroprotective properties and has been shown to be effective in the treatment of neurodegenerative diseases such as Alzheimer's disease, ischemia, and Parkinson's disease (Marín-Prida et al., 2012).

The potent antioxidant property of phycocyanin may inhibit the development of cataract by regulating biological pathways to maintain the lens of the eye (Kumari et al., 2015).

Which phycocyanin should you buy?

When purchasing phycocyanin, care should be taken to ensure that it is freeze-dried powder. This method of drying allows as many functional molecules as possible to be preserved, as it is an even gentler process than drying with heat.

It is also worth paying attention to where the phycocyanin is produced. Some regions of the world are less strict about quality standards than is the case in Europe, for example. This in turn can have negative consequences for the phycocyanin powder in terms of contamination and toxicological exposure.

How to use Phycocyanin?

Phycocyanin powder can be used in food supplements and taken as capsules or tablets. In addition, it can be mixed with normal food and thus be taken with food.

Phycocyanin is often found as a pigment in smoothies or shakes, where it not only provides an interesting color but also has health benefits.

It is also possible to take concentrated Phycocyanin shots, which are particularly beneficial after exercise. These can help with recovery after intense physical exertion.

When does Phycocyanin take effect?

The length of time it takes for Phycocyanin to take effect varies from person to person. For some, results may be seen after a very short time. For others, it may take several weeks or even no effect at all. However, before increasing the dose if there is no effect, this should be discussed with a physician.

The question of what the difference is between phycocyanin and spirulina is a bit misleading. The cyanobacterium Arthrospira (still conventionally known as Spirulina) contains phycocyanin in small quantities, so one cannot really speak of a difference between the two.

The blue spirulina dye phycocyanin is a natural food colouring. It is a healthy protein with many amino acids and can be used in various products. Especially in colored sweets, phycocyanin is a unique, natural color for blue.

The company Haribo offered blue jelly babies as a short-term offer in the Fan Edition. The blue eye-catchers were coloured with the natural colouring agent phycocyanin from spirulina.

Phycocyanin powder is often used in cosmetics as a coloring and functional component. It not only promotes a healthy skin appearance, but also has anti-inflammatory properties. In addition, the substance contained in Spirulina determines a long-lasting green-blue coloration in cosmetic formulas such as peelings.

Phycocyanin has strong antioxidant properties. It also contributes to wound healing and tissue regeneration. The antimicrobial and anti-inflammatory effects of phycocyanin powder support the healing process of skin problems such as acne.

Phycocyanin powder is already used in many cosmetic products, such as anti-aging cosmetics, where it remineralizes, revitalizes and moisturizes the skin.

Phycocyanin is formed by the microalgae Spirulina and is a natural, water-soluble antioxidant with an intense blue colour. Various studies have demonstrated anti-inflammatory properties. Due to its antioxidative potential it is also an effective radical scavenger.