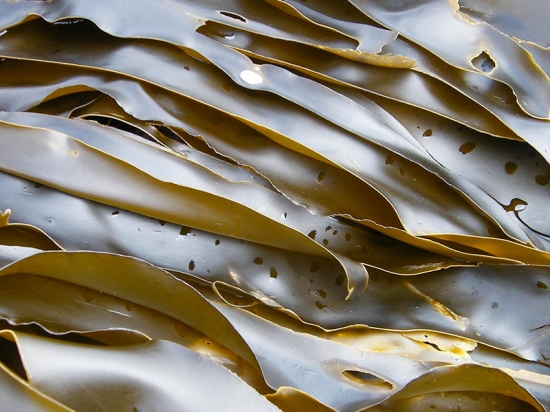 What is Laminaria digitata?

Laminaria digitata is a large brown alga and belongs to the family Laminariaceae.
Its name "Laminaria" comes from the Latin "Lamina" and means something like "blade". So typical of the alga are the fingered fronds / blade-like cilia.

A mature state of the alga has three to eight segments. The number depends on the light, size, season and growing area. In addition, the brown alga is shaped in a kind of thallus (shoot), which resembles a human hand. This is where the name "digitata" comes from, as this is also derived from the Latin "digitus" meaning "finger".

​Where is Laminaria digitata found?

The common brown alga is found mainly in coastal zones. In shallow coastal areas where the sun reaches the seabed. Thus, this species is often found in the northern Atlantic and Arctic Oceans. On British and Irish coasts, in the North Sea along Scandinavian coasts, in Iceland, on the Faroe Islands, in southern Greenland, on the east coast of North America (Hudson Strait - NY), in the Canadian Atlantic, the seagrass cannot be overlooked. But also in the south, on the south coast of Brittany, the alga Laminaria digitata can be found.

How nutritious is Laminaria digitata?

Due to the abundant vitamins, minerals and trace elements, the alga Laminaria digitata stands out as an excellent food. Besides calcium, potassium, iodine, iron, carotene, phosphorus, protein, alginic acid, niacin, lamaran and mannitol, the brown alga contains the vitamins of the B-complex and vitamin C, and gives many other trace elements.

How is Laminaria digitata used?

Whether in the kitchen as food, dietary supplement, in the pharmaceutical industry, in medicine or in the general food industry, Laminaria digitata can be used and applied in different ways due to its versatile sources.

For example, as a supplier of glutamic acid, an amino acid, the alga serves the 5th basic taste - umami in Japanese. Umami imparts soft, silky flavor and is often used in Japanese and Chinese cuisine, especially used in "dashi" (soup broth). Recommended in combination with vegetables, such as beans or lentils.

It shortens cooking time and also improves digestibility. Also known as a sea vegetable in snacks, flavors and seasonings. Brown seaweed is a super source of energy and so serves as a dietary supplement, increasingly marketed in powder form.

Mainly, however, the versatile algae serves as a source of algin. Alginic acid is an efficient ingredient in cosmetics, as well as a popular slimming and remedy for indigestion. The fat burning property, due to the containing fucoxanthin in combination with the triglyceride absorption effect of the alginate, serves to alleviate diabetes. In medicine, for example, there are the Sea Tangle tents (dried stems), which are helpful during pregnancy and to induce labor.

The alga has the property to be used and processed as a refractory material. Thus, Laminaria digitata is also a raw material in the manufacture of paper, textiles, waterproof and fireproof fabrics. Increasingly, it is used in the food industry, for thickening, emulsifying, for jellies and ice cream, as well as for stabilizing drinks.

How and when is Laminaria digitata harvested?

The brown alga lives 4 - 6 years and is harvested in the 2nd or 3rd year of cultivation. The harvest time usually begins in April / May and ends in October.

Laminaria digitata, also known as “oarweed”, is a macro-algae found in the North Atlantic, Baltic and North Sea, which can form extensive seaweed forests.

The best known and economically most relevant use of Laminaria digitata is the production of alginate from the alginic acid it contains, which is used as a thickening agent for the food industry.
But it can also be consumed as a seaweed vegetable.

In the past, Laminaria digitata was valued and used as a natural fertiliser and iodine source.

In addition to its use as a food and fertilizer, oarweed also has much to offer the cosmetics industry.
Due to its many minerals and trace elements, Laminaria digitata has a revitalising and mineralising effect on the skin. Added to this are moisturising and antioxidant properties that protect the skin from external influences.

Laminaria digitata can accumulate high quantities of Iodine, therefore it is advisable to reduce consumption to blanched varieties, or keep the amount of consumed tang low.