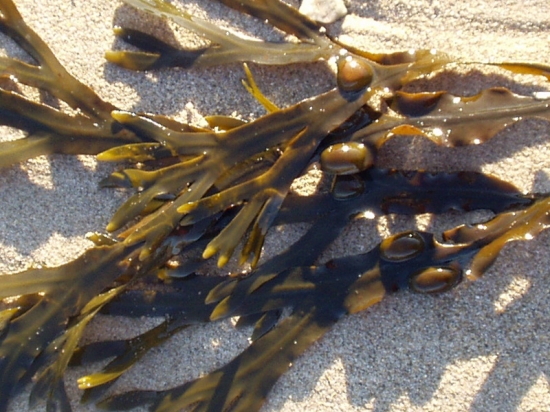 What is Fucus vesiculosus?

Fucus vesiculosus is a brown algae and is also called bladderwrack due to its growth form and the so-called gas bubbles. The gas bubbles are arranged on both sides and in pairs and give the widespread macroalgae a lot of energy in the water.

The leathery brown algae is a perennial kelp with a length of 10-30 cm.
The mucus layer covering the brown-green algae protects it from drying out during low tide.

What are the ingredients of brown algae?

In addition to the 0.1 - 0.5% iodine content, the algae also has beta-carotene, alginic acid, polyphenols with antibiotic effect, xanthophylls (fucoxanthin), polysaccharides and pectin-like mucilage. In addition, Fucus vesiculosus provides a high content of minerals and trace elements.

Where is Fucus vesiculosus found?

The bladderwrack covers the coastal regions of the Atlantic, such as Canada, to northern Europe. The brown algae can be found in both the North Sea and the Baltic Sea. In addition, Fucus vesiculosus grows in southern regions such as the Canary Islands, the Caribbean, Brazil, or Morocco. Above all, the algae grows on solid ground such as rocks, stones or wood in surf and upper intertidal zones.

In addition, the brown algae in extract form offers itself for a more beautiful skin appearance and is therefore also used in cosmetics. The pharmaceutical industry also benefits from the active ingredients, because through the extraction of the alginate, diseases can be treated, for example, by thalassotherapy, as in the case of hypothyroidism, hay fever, arteriosclerosis, psoriasis, remineralization or for the treatment of obesity.

Due to the mucilage fucoidan, the algae can have an immunostimulant effect in various types of cancer. In case of hyperthyroidism as well as during lactation, the intake of Fucus vesiculosus in any form should be avoided. The consequence could produce iodine overdose.

Not only the food and dietary supplement industry can benefit from the micronutrients, also for animal feed and fertilizer production the use of Fucus vesiculosus is useful.

How is Fucus vesiculosus taken?

The algae finds its usual use in cosmetics in liquid form. However, the macroalgae is also available as powder, flakes and as dried Fucus vesiculosus algae (raw).
The powder is more commonly used in the production of dietary supplements, animal feed or organic fertilizers.

How beneficial is the intake of the brown algae?

Fucus vesiculosus can help with weight loss and stimulates the metabolism during fasting cures. The brown algae provides refreshing energy in case of exhaustion. Its moisturizing effect soothes irritated and dry skin and makes it look more relaxed and younger. It manages to soothe the consequences of irritants and also has an anti-inflammatory property.

Fucus vesiculosus also known as "bladderwrack" is a brown alga that occurs in many parts of the oceans.
It has been traditionally used as a food for centuries, especially in Ireland, Scotland and Great Britain.
Because of its many nutrients, it can also be used as a fertilizer in the form of mulch, which is added directly to the soil, or as part of compost.

But bladderwrack is not only interesting for humans and plants, but also for animals. Thanks to the micro-nutrients, it is ideal as an additive for animal feed.

Apart from its nutrients, bladderwrack can also be used for medical purposes. For example, it is recognised by the European Medicines Agency as an aid to weight reduction.

Fucus vesiculosus, is also used in cosmetics to soften dark circles under the eyes and reduce signs of fatigue. Bladderwrack also has a skin tightening effect, which gives the skin an overall younger appearance. For example, the cosmetics company Gallinée has developed a special cream based on Fucus vesiculosus.

Fucus vesiculosus contains alginic acid, which can help soothe irritated skin as it has anti-inflammatory properties. It can be used in moisturizers and make the skin look more relaxed and younger.

By improving elasticity and refreshing the skin's appearance, Fucus vesiculosus works well as an ingredient in anti-aging cosmetics.

Like many other macroalgae, Fucus vesiculosus acts as an antioxidant and helps protect the skin from free radicals and oxidative stress.