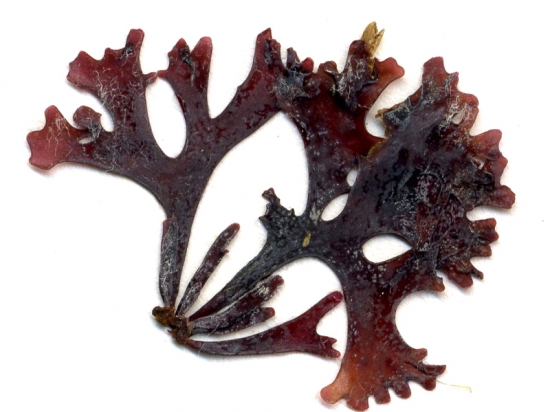 Chondrus crispus, also known as "Irish moss", is a red alga that occurs on the North Atlantic coasts, but also on the North and Baltic Seas.

Apart from its properties as a thickening agent, cartilaginous kelp has also been used as a food and animal feed since time immemorial.

Because of its many minerals and trace elements, Chondrus crispus has a mineralising and antioxidant effect on the skin. It is also moisturising and can help with dry and stressed skin and skin problems such as eczema.
Due to its antiviral and antimicrobial effect it helps the skin to regulate its microbiome. But Chondrus crispus is not only useful for the skin but also for the hair, it gives it strength and shine due to the many healthy ingredients.

Chondrus crispus powder can be used as an antioxidant and also has anti-inflammatory properties.

The versatile nutrient profile of Chondrus crispus powder contains amino acids, minerals and vitamins. They can be absorbed and accumulated by the skin when blended in cosmetics products. These ingredients can have a positive effect on skin as a whole.

The natural polysaccharides and the occlusive properties, as well as the peptides and amino acids help the skin retain its moisture. Therefore it is well suited for use in lotions and moisturizers.