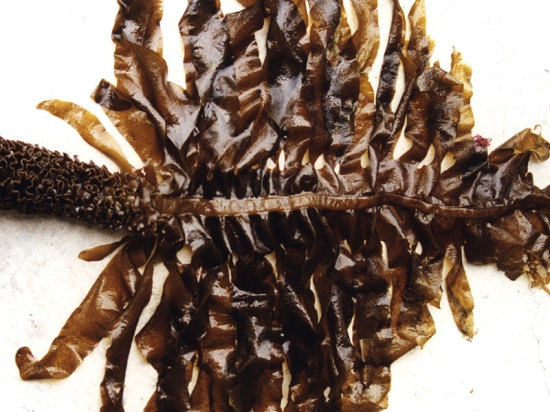 What is Undaria pinnatifida?

The seaweed can grow up to 3 meters high and clings to stones and rocks with the help of its claw-like adhesive organ (rhizoids). The cartilaginous, dark brown wakame kelp has a broad, flat "leaf" (thallus) with a wavy edge that can divide into finger-like bands.

Where does Undaria pinnatifida grow?

Undaria pinnatifida grows on hard surfaces, such as rocks and stones. The macrolage also shimmies up slightly unnatural places/objects - ropes, buoys, hulls of ships and marine equipment, and pylons. The alga thrives below the tidal limit, in current-rich water.

Today, the opportunistic brown alga is classified as an invasive species, due to fouling on ship hulls and subsequent distribution of spores, it also occurs in its alien habitats. As a result, Undaria pinnatifida can now be found around the world. Unfortunately, this results in native algae and plants being displaced by Undaria pinnatifida.

Where and how to buy Undaria pinnatifida?

The popular brown alga can be found in stores selling Japanese specialties. Undaria pinnatifida has been successfully cultivated in Brittany and is now also available as a European product.

The alga is suitable for consumption raw, dried or cooked. In pharmacies, among others, Undaria pinnatifida can also be purchased as powder, in capsule form (often as a dietary supplement) or liquid form.

What are the benefits of Undaria pinnatifida when used for skin?

Undaria pinnatifida is recommended for daily use on and for the skin due to its nutrient-rich ingredients, making it ideal for natural cosmetics and pharmaceuticals. Among other things, wakame has an antioxidant effect, which therefore protects the skin from external influences.

The high liquid need of the skin is covered with application of the brown alga, because by the Fucoidan the epidermis is hydrated and tightened. Here the liquid extract is recommended for integration in the formulation of cosmetics.

Undaria pinnatifida is rich in different polysaccharides that give it antioxidant, antiestrogenic, antidiabetic and photoprotective properties. In addition, it is excellent for nails, bones and hair.

What are the effects of Undaria pinnatifida when ingested?

Consumption of Undaria pinnatifida can have a positive effect on health. Due to the alginic acid it contains, ingestion of the brown alga provides detoxification and cleansing of the intestines. The sweet, mineral and slightly oyster tasting Wakame algae is rich in proteins, fiber and minerals. This supports a fast metabolism and more efficient hormone metabolism.

In addition, the algae is low in unsaturated fatty acids and has four times the iron content of spinach. The high protein content ensures easier muscle building and faster recovery after a hard workout.

The fucoxanthin contained in Undaria pinnatifida can act as an active ingredient supporting weight loss by activating the key protein for fat burning.  Undaria pinnatifida can improve metabolism and facilitate the regulation of blood sugar levels. In addition, wakame has many different nutrient-rich trace elements and vitamins.

Thus, regular intake of seaweed can eliminate the need for artificially and chemically produced supplements.

How nutrient-rich is Undaria pinnatifida?

As already mentioned, Undaria pinnatifida is rich in minerals, vitamins and trace elements. In addition to the high iodine content, the super alga offers the supply of zinc, fiber, proteins, as well as vitamins A, C, E and B12.

The vitamins it contains, especially vitamin B12, make the alga a superfood. This is because people can often only take it as a supplement or a diet containing meat.

The richness in protein of the brown alga is important for the muscles and serves the improved performance as well as the regeneration during and after sports. In addition, the metabolism is boosted thanks to the fiber and thus serves the gastrointestinal function.

What side effects may occur when taking Undaria pinnatifida?

Undaria pinnatifida is an alga that can accumulate a lot of iodine depending on where it grows. Despite the high importance of this trace element for health, too high an intake of the alga can be harmful even for those affected by years of iodine deficiency.

The effect of unusually high intake of iodine-containing products can stimulate the production of thyroid hormones and thus overstimulate the metabolism. Thus, attention should be paid to the recommended dosage to avoid risks.

If you wish to enjoy the taste but less iodine, it is recommended to soak the dried alga in water for several hours. In between, you should rinse the alga every now and then and change the water. This way a high amount of the trace element iodine is rinsed out.

For whom is Undaria pinnatifida recommended?

To integrate the alga more often into everyday life or diets is generally recommended. Especially pregnant women, athletes, children and teenagers benefit from the ingredients and the mode of action of this alga. Undaria pinnatifida is particularly recommended for those who wish to lose weight.

The brown alga is also suitable for women who are in premenopause or menopause. Here there is often a risk of not being able to lose weight despite an adapted diet and regular exercise.

Moreover, taking capsules, Undaria pinnatifida alga, is advisable in low-calorie diets, when more and faster calories are burned and detoxification of the organism is to be supported, for both women and men.

Moreover, regular intake of Undaria pinnatifida is not wrong for everyone. Because due to the ingredients of the brown alga many deficiency symptoms are prevented. Thus, the alga is especially sought after by vegans and vegetarians as a "supplement". At the same time, it is considered a comparable substitute to the animal protein source.

How can Undaria pinnatifida be used in everyday life?

Undaria pinnatifida, or wakame, in its fresh form, is one of the best known Japanese foods and can be incorporated into many different dishes in everyday life.

In addition to the raw and cooked form, there is also the dried version, which can be soaked in lukewarm water for a few minutes to soften it. In this way, the alga gains volume and can then be eaten in warm dishes or as a salad.

When dried, the brown alga is easy to keep and can be stored for a long time at room temperature without direct sunlight or humidity. Undaria pinnatifida is the most important Japanese edible alga after Nori and is considered a delicacy.

To add the beloved spicy and salty-sea flavor to one or another dish, the dried Undaria pinnatifida algae can also be used as a spice.

Undaria pinnatifida, also known as "Wakame" is probably best known as green seaweed salad and soup, which is widely used in Japanese and Korean cuisine. Wakame also has another positive aspect, due to the fucoxanthin it contains, it can be used as an active ingredient for weight reduction. Wakame also contains many different trace elements and vitamins.

Like many other types of algae, Undaria pinnatifida is very good for the skin and is therefore ideally suited for natural cosmetics. Due to its wide range of ingredients, Wakame offers an antioxidant effect that protects the skin from external influences and detoxifies it. What makes Wakame special is that it is part of the brown algae and therefore contains a substance called Fucoidan, which hydrates and tightens the skin.