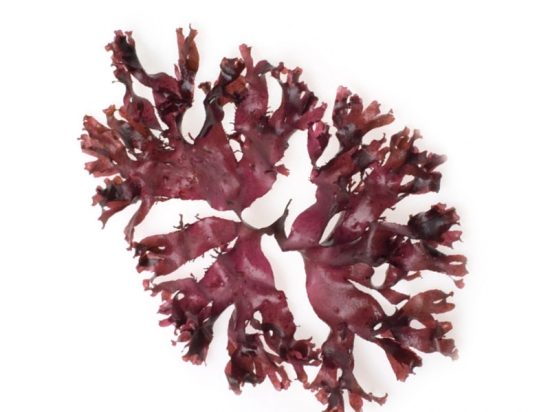 What is Palmaria palmata?

Palmaria palmata, also called lobster kelp, is an edible red algae and is from the Palmariaceae family. Harvested for centuries, ragweed is used as a delicacy and a valuable alternative food source. Not only for humans, but also for the life of underwater animals, the macroalgae "Dulce" or "Dulse" (common name) is of great importance. Also still known as "Red Dulse" and "Creathnach".

Due to its maximum size of 50cm and its leathery frond shape, Palmaria palmata forms a small scrub for crustaceans, small fish and other creatures.

Where is Palmaria palmata found?

Found primarily in the northern, cold and coastal waters of the Atlantic and Pacific Oceans, Palmaria palmata grows with other algae in the intertidal zone. In the light-flooded areas of the sea, which can also dry out during low tide. The macroalga holds on with the "adhesion organs" and grows on stones and/ or other algae.

In order for the alga to continue reproducing and growing after harvest, parts of the fronds are left behind. This allows for a sustainable harvest with the assurance that populations will recover.

When to take Palmaria palmata?

Low in fat and calories, Palmaria palmata macroalgae is especially good for athletes and dieters, as it is a rich source of protein and nutrients.

Palmaria palmata can also be used as an antihypertensive in certain cases. If you have problems with intestinal flora, regular intake is not wrong, because Palmaria palmata has a positive effect on the digestive tract due to its detoxifying effect.

In addition, its beta-carotene content can promote natural vision and reduce negative processes. Lobe kelp can also be used as a natural supplement for iodine deficiency, as it is very rich in iodine.

How nutritious is Palmaria palmata?

Palmaria palmata is relatively low in sodium, but often serves as a salt substitute due to its salty taste. The macroalgae has been used as a food for thousands of years and is rich in fiber and protein (the protein quality comparable to nutrient-rich vegetables).

More than 100% of the recommended daily allowance of vitamin B6, 66% of that of iron, vitamin B12 and fluoride, covers a small amount of the ragweed.

In addition, the red alga is rich in calcium, vitamin A, iron, iodine, vitamin C, potassium, and trace elements. The bones are strengthened and more resistant due to the high content of potassium and calcium.

Especially for vegetarians, the nutrient-rich red algae is highly recommended, because the high vitamin B12 content, which comes from most animal food sources, compensates for the deficit of meat in the diet.

The antioxidants it contains can help boost the immune system. Taking Palmaria palmata can not only help lower blood pressure, but also support the preservation of vision and thyroid health.

How is Palmaria palmata used as a food?

Palmaria palmata can be used as a snack, flavor enhancer, spice or as a tasty sea vegetable and is already very popular, especially in Asia.

The macroalga has also been used as a food in Scotland for a long time. There it was harvested by monks more than 1,400 years ago. In Iceland, lobe kelp is known with butter. The flexibility of the red alga is exploited in soups, salads, sandwiches, in bread or pizza dough and stews. Elsewhere, it is used as a specialty baked in the oven with cheese or made into chips in pans.

The peculiarity of the fried form of Palmaria palmata macroalga is its bacon-like taste after it has been fried.

The use of Palmaria palmata for various purposes

In addition to the popular processing and integration of Palmaria palmata in cooking, the alga is also a "film former" in cosmetics. This is because Palmaria palmata extract gives lotions and creams a smooth, unbroken and rich texture.

In addition, the algae has a protective effect on the skin. The natural emollient helps to draw moisture from the environment into the skin, protecting it from environmental damage.

The rich ingredients of Palmaria palmata such as calcium, iron, amino acids, pantothenic acid (vitamin B5), magnesium and the high content of folate promotes cell growth, improves and stimulates the appearance of the skin.

Besides its conventional use in food and cosmetics, Palmaria palmata is also used as animal feed and fertilizer in various countries.

How should Palmaria palmata be taken?

Palmaria palmata can be taken and consumed in a variety of ways, and is therefore also available for purchase in many forms. Whether fresh for consumption or in dry form.

What are the possible side effects of taking Palmaria palmata?

Besides the high iodine content, there is no high risk of side effects with moderate consumption of Palmaria palmata algae. However, in case of hypothyroidism, the intake of the red alga is not recommended at all.

Palmaria palmata, also known as "Dulse", is a red algae widely found along the Atlantic coast. Traditionally it is often used for food and is a good source of trace elements such as iron, magnesium and potassium. It also contains vitamin B-6 and protein, making it a good source of additional vitamins and minerals.

Palmaria palmata also plays a role in natural cosmetics. When used in creams, it creates a protective film on the skin and protects it with its many trace elements. This is an advantage especially for easily irritated skin as it is better protected against external influences like sun and wind.

Examples of this are the numerous products of the Dulse & Rugosa brand from the USA.

Typical applications in the cosmetics industry:

Palmaria palmata powder is increasingly used as part of moisturizers, cleansers and massage oils. In addition, it is used in hand creams, conditioners, soaps, and cleansing creams.