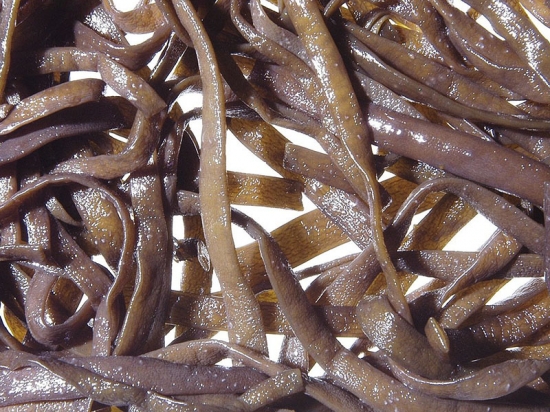 Himanthalia elongata, also known as “thongweed”, is a brown alga that occurs in colder waters such as the North Sea, Baltic Sea and the Atlantic Ocean near the coast.

Himanthalia elongata is probably best known as a food, because of its appearance it is also known and eaten as sea spaghetti in France and Ireland.
Apart from its relevance as a whole food, it also plays a role as an ingredient. In some meat products it is added as a binding and gelling agent.
Antimicrobial properties have also been identified which may make it possible to extend the shelf life of products.

But the possible applications of thongweed extend beyond its use as a delicacy. Himanthalia contains many nutrients and Vitamins, including Vitamin A, C and E as well as Potassium, Magnesium and Calcium.

In the field of cosmetics, Himanthalia elongata is valued for its moisturising properties and its antioxidant effect, which protects the skin from external influences. Moreover, its thickening properties may be beneficial in the formulation of creams.
Zelens, for example, have developed an anti-aging cream that takes advantage of the many positive properties of thongweed.